This is adapted in part from a paragraph in our recent article The Brattle of New Orleans, an account of our experiences at Lee Circle on May 7th.

Quite disgracefully, in our opinion, the Louisiana chapter of the Sons of Confederate Veterans were entirely missing from the pro-monument demonstrations at Lee Circle in New Orleans on May 7th, 2017. Rather than helping to fight a real battle by standing up to defend their heritage and its symbols at Lee Circle, they were out at Jackson Crossroads for the day, play-acting as toy soldiers.

A few days after the event I visited the Facebook page for the Sons of Confederate Veterans, and I saw a post from the Louisiana Division Commander, J. C. Hanna. He had a picture taken of himself as he sat comfortably under a shade tree in Jackson Crossroads, while talking on a cell phone. In the caption he boasted that he was being interviewed by CNN regarding the removal of the monuments in New Orleans! [Updated Screenshot from May 17th.] 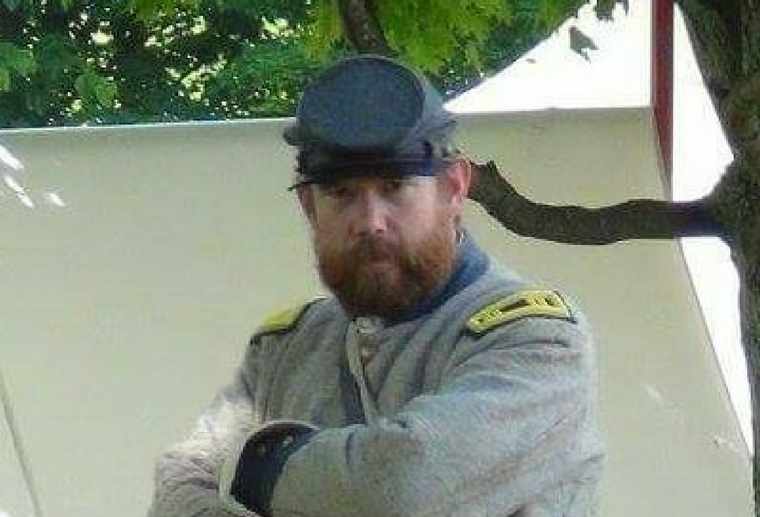 We have been wanting to write something on the event described here for quite awhile, and this is our first opportunity.

The more we hear from the Sons of Confederate Veterans, the less we like them. They cuck for CNN, they cuck for a poorly defined sort of civic nationalism, which is not nationalism at all,  they cuck for Black Lives Matter and the Antifa, and now they are cucking even for sodomites and the LGBT agenda.

Here we shall reproduce a letter from Michael Skinner, pictured above left. Skinner is the South Carolina Division 9th Brigade Commander for the SCV. Below is a reproduction of a letter from his office announcing the promotion of a shamelessly open sodomite to the office of Brigade Lieutenant Commander, which he then boasts is a first not only for South Carolina, but for the entire organization.

We have searched for open protests to this event and have only found one supposedly seccessionist website which actually applauds the appointment. Skinner is still listed among the officers of the South Carolina Division at the SCSCV website, so the State organization must also approve of the appointment....

North Florida League of the South