This statement appeared on Facebook after the Charlottesville #UnitetheRight rally was destroyed by the police collusion with Marxists on August 12th, 2017. We were at Lee Park in Charlottesville that day, and can vouch that every statement here is accurate.

Imagine you were a US citizen and you wanted to protest the removal of a monument.

Imagine you joined a group that advocated protecting it but you had to use a pen name so you wouldn't be fired from your job.

Imagine you took off from work to advocate for your cause in public.

Imagine you got a permit to hold a peaceable assembly only to have that canceled at the last minute.

Imagine you got a court order that said you could still have your assembly but the police arrived at the beginning and dispersed it anyway.

Imagine the police laughed as they threw you to a mob where you were pepper-sprayed and beaten, and those police just stood by and watched.

Imagine journalists took pictures of you and your enemies used those pictures to try to get your employers to fire you.

Imagine you knew all this would have been illegal, if you hadn't been White. You knew the laws don't protect you because you're White.

Imagine the godless Media said you were evil—and that's the exact word they used.

Imagine companies tweeted out pictures of you with gun sights on your head. Imagine they joked about killing you and all your friends.

Imagine a governor, who used convicted criminals to rig an election, said that you criminals weren't welcome in his state anymore.

Imagine a US Senator who collaborated with the enemy in wartime called you a traitor.

Imagine all your accusers said you were the bigot. They called you a coward for standing up to the powerful. They accused you of trying to censor them when you were the one silenced.

Imagine you had friends and family turn their backs on you because what the TV said was more important than what you said.

If you imagine this, then you will understand why this country is about to change. We are going to change it. We won't be scared away either. You'll find we're made of sterner stuff. In fact, we're the kind of men who have statues made of them.

We are Founding Fathers. We are creating a new country that will replace this wicked one. Whose side do you think God is on? You had better hope you're on that side.

This is a video of the march from a Charlottesville parking garage to Lee Park by various members of the League of the South, the Traditional Workers' Party, the National Socialist Movement, Identity Europa and other groups which sought to attend the recent #UnitetheRight rally.

We were not on the front lines, but back in the middle of the column, and from there my wife Melissa recorded this video. Aside from some of the mundane locker-room style rhetoric which is common among Nationalists attending such events, you may notice that there was little to no aggression on our part, and that we were relatively quite calm and peaceful. Of course, this is absolutely contrary to reports slandering all of us which have been running continually in the mainstream media.

There may have been some violence at the vanguard of our procession, but we were even oblivious to that. We only found out later that Marxist groups tried to block our passage into the park, and for that some minor scuffles ensued. Evidently even the men in front of us had conducted themselves with great restraint, because that initial violence did not escalate, and we entered into the park peacefully. Our opposition, however, continually taunted us with verbal abuse and provocations, and were anything but peaceful. They alone were responsible for the initial violence, and for all of the later violence. 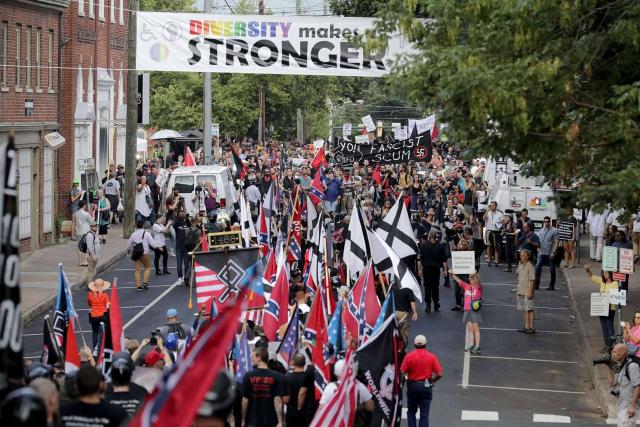 As a procession of members from The League of the South, the Traditional Workers Party, the National Socialist Movement, Identity Europa and other groups attempts a peaceful march to Lee Park in Charlotesville, where they had a permit to assemble, the way is blocked by counter protestors who had no permit - but the police did nothing. After a relatively minor initial skirmish, the procession was able to proceed.

This is over 16 minutes of high-resolution video from the front lines at Charlottesville, taken after the League of the South and the rest of the National Front had entered Lee Park, and before the violence from the leftists escalated to the point where the police had decided to cancel the event and force the Right out of the park. This 16-minute clip covers over a quarter of the time that the National Front was in the park, which was only about an hour.