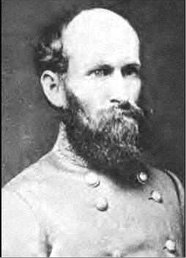 On April 9th of 1865 there was a bright spot in the Confederate surrender at Appomattox, Virginia. That bright spot was Brigadier General Martin Witherspoon Gary.

During the confusion of battle on that final day, a Confederate courier rode between the lines with a white flag and shouted, "Hostilities have ceased. Stop firing." At the same moment a Federal officer (a Lt. Allen) rode up and asked, "Who commands this cavalry?"

“I have been sent here by Gen. Gordon, of your army, to tell you to stop firing, that your army has surrendered," was Lt. Allen's reply.

"You're a liar, sir, go back to your command. These men are South Carolinians and do not surrender," Gary answered. Bidding the men await his return, he rode immediately over to Gen. Lee to learn the true state of affairs.

Returning to his men he confirmed that Lee had surrendered the Army of Northern Virginia.

Turning his command over to Col. R.B. Arnold, Gary took about 200 men of his Brigade through enemy lines that night and eventually linked up with another man who refused to be a “good American”, President Jefferson Davis. Gary and his men met President Davis in Greensboro, N.C. and escorted him and his cabinet as far as Cokesbury, South Carolina.

After the war Gary was active in Democratic Party politics, in 1876 he was the most uncompromising and outspoken leader of the “Straight-out” faction of the South Carolina Democratic Party.

Backing Wade Hampton for governor, Gary crafted “The Edgefield Plan.” It was modeled after the Mississippi plan and included a campaign of voter fraud, physical intimidation, murder and general vigilante action. Gary assembled “Rifle Clubs” of Red Shirts to carry out the plan. So successful was this campaign of violence and disorder that it helped tilt the political balance of power to the Democrats in the 1876 election and brought “Redemption” to the State of South Carolina after years of Black Republican rule.

16 years later to the day of his bold decision at Appomattox, Gary died on 9 April, 1881 at his home in Cokesbury, South Carolina.

Modern Southern nationalists have much to learn from such audacious men as General Martin Gary. When our Southland was covered in a death-shroud of dark hopelessness and despair such men showed us the path to victory. Do we have the courage to follow them today?