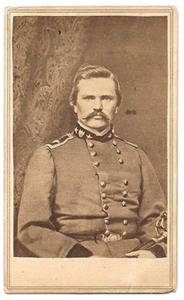 The organizer of the Kentucky State Guard, which largely joined the Confederacy, Simon B. Buckner rose to the rank of lieutenant general during the war. The Kentucky West Pointer (1844) served with the infantry in Mexico, winning two brevets and suffering a wound at Churubusco. He then returned to his teaching post at his alma mater.

Feeling that the mandatory presence at Sunday chapel was a violation of his rights, he quit that post and returned to infantry service in 1849. In 1852 he transferred to the commissary branch but resigned three years later to engage in the real estate business. In the remaining years before the Civil War he was adjutant general of the Illinois militia and directed the reorganization of his native state's armed forces.

As the head of the state's military forces he attempted to preserve its precarious neutrality but in July 186 1 the Unionist-controlled military board of the state ordered the State Guard, which they considered pro-secessionist, to turn in its arms. Buckner resigned on July 20th and two months later was named a Confederate brigadier general, neutrality having come to an end. Initially in command in central Kentucky, he later led a division from there to reinforce Fort Donelson. He directed the attempted breakout from the encircled post on February 15, 1862, but was called back by his superiors, John B. Floyd and Gideon J. Pillow. Both of them fled across the Cumberland River rather than surrender and left the task to Buckner. He was outraged by Grant's demand for unconditional surrender, but he was somewhat mollified by later developments.

He had paid Grant's New York hotel bill when the future Union general was on his way home, having resigned from the army. Grant returned the favor in kind, knowing that Buckner would have difficulty obtaining funds as a prisoner-and put his purse at the disposal of the vanquished.

Exchanged on August 27, 1862, Buckner was promoted to major general and led his division at Perryville before being ordered to take command along the Gulf coast. The next spring he took over the Department of East Tennessee. On July 2 5, 1863, this command was merged into the Department of Tennessee under Braxton Bragg but was retained for administrative purposes. Thus Buckner was reporting to both Bragg and Richmond. This awkward situation led to ill-feelings later on.

During the buildup prior to the battle of Chickamauga Buckner reinforced Bragg and his command became a corps for the battle. When Jefferson Davis visited the army shortly thereafter Buckner was one of the leading critics of Bragg's generalship. For this reason Bragg shunted Buckner back off to East Tennessee just before Chattanooga. There he served under Longstreet during the siege of Knoxville.

He then held a number of special assignments until again being placed in charge of the Department of East Tennessee in the spring of 1864. During this period he spent much of his time in Richmond where he became known as "Simon the Poet" for his penchant for writing poetry.

Later that spring he was ordered to the virtually cut-off Trans-Mississippi as E. Kirby Smith's deputy. Not allowed to return to Kentucky for three years after the war, he resided for that period in New Orleans and then resurrected his fortune. After serving as a pallbearer at his old friend Grant's funeral he entered politics, serving a term as governor. In 1896 he ran for the vice presidency on John M. Paimer's Gold Democrats ticket.

At the time of his death he was the only surviving Confederate officer over the rank of brigadier general. (Stickles, Arndt Mathias, Simon Bolivar Buckner: Borderland Knight)