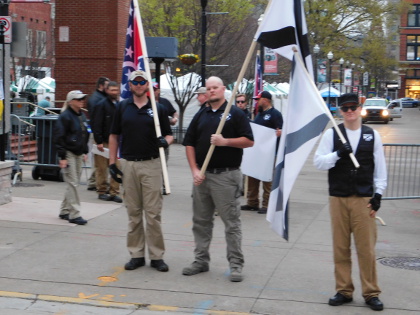 The dreary mid-March morning lined the sky with gray clouds as our small caravan headed down the interstate and into the center of Knoxville at the break of dawn. We really didn't know what to expect, but at this early hour there were few people, few cops, and no Antifa. So whatever did happen would only be a reaction to our intendedly peaceful presence. Here the League of the South would try something a little different, and would hold a small demonstration with no prior announcement, no permits, and hopefully no overwhelming or oppressive police reaction. Doing this, we hoped to actually interface with the general public and pass out some of our literature. This is, after all, the purpose for that right to assemble which is supposedly guaranteed in the united States' Constitution. 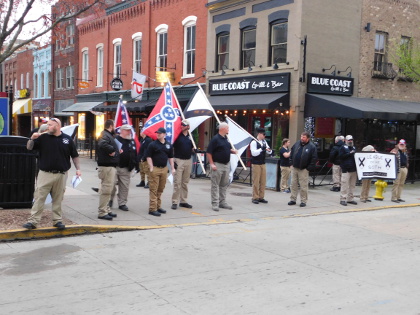 Of course we did not want another Charlottesville, but it was calculated that for such an early and unannounced demonstration, the Marxist opposition would still be sleeping off their typical Friday night indulgences. However Michael Hill, the League president, had also expressed the desire that there would be no more Shelbyvilles, where last October we were corralled into a remote area under an inordinate police presence to hold a “public” demonstration that only we ourselves could witness, being separated from the actual public by two city blocks of barricades.

Arriving in Market Square around 7:30 Saturday morning, vendors were busily setting up their tents for the Saint Patrick's Day festivities. Within an hour pedestrian traffic was elevated, and even more so because a 6-kilometer benefit run was to begin from Market Square at 10:00 AM. Approximately two dozen of us lined the street at Wall Ave., while some of our group marched with their Confederate and Southern Nationalist flags back and forth around the square from Union Ave.

The police response was nearly congenial. They raised only a few small concerns, and a couple of police cruisers parked down each side of Wall Ave. to watch us for a short time. The organizers of the Market Square festivities that day had some trepidation at our presence, but neither did they cause us much trouble. 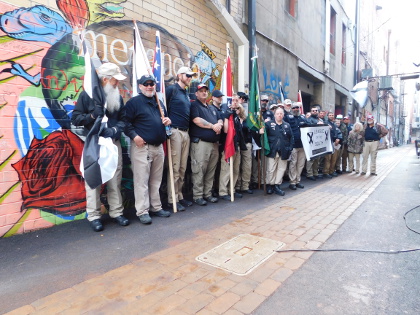 Until after 10:00 we passed out literature, meeting more than a few friendly faces, and as about as many disinterested ones among the passers-by. The runners gathering seemed mostly apathetic, and however friendly some of them were it is understandable that they were more focused on the race in which they gathered to compete. I handed a copy of our Free Magnolia newspaper to one man, who had four young White children in tow. He looked at it while walking away and made a show of disgust as he crumpled it and tossed it into a wastebasket. However he was an exception, and most of the people we encountered were friendly even if only a few of them stopped to engage in a longer conversation.

A half-block or so from Market Square there is an alley, called “Antifa Alley” by at least some of the locals. Dark, dank and decorated with degenerate and typically northern urban graffiti and murals, a vagrant slept on the ground in one far corner as we filed in for a photo opportunity. There was nary a Leftist in sight, but some of our local League members thought that a group photo in the alley would make a good trophy. Our enemies cannot count any of the ground of the South as sacred to themselves. 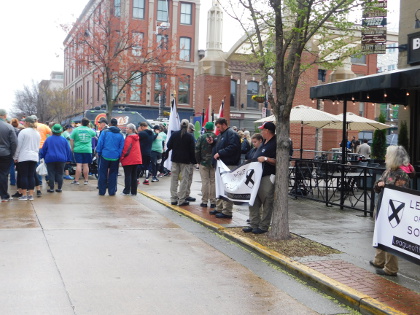 Of the hundreds of people we encountered, there was not one protester. There was not one person who openly expressed any fear, disgust, or who seemed to be distressed by our presence. There was no abusive language, no one shouting at us, no one publicly expressing fear or chagrin. No one was terrorized, not even among any of the many negroes and other obvious foreigners who passed by without any apparent trepidation. All of the lies which the post-Charlottesville media spread concerning the methods and intents of the League of the South were laid bare at Knoxville on March 17th.

But there is no media which covered this event. This morning, March 20th, I could find not one media report of our presence in Knoxville on Saturday the 17th. There were news agencies present, perhaps to cover the race or the other Saint Patrick's Day festivities, but they seem to have simply ignored us. Where are the media reports? They are not, because the events of the day do not advance the media's agenda. Is the League of the South not newsworthy? We would never suspect as much after the other events that the League conducted in Tennessee last year.

At Charlottesville last August, all of the violence was incited or initiated by Leftists, by the Antifa and Black Lives Matter and other such groups. Then the left-leaning media blamed it on the groups from the Right. However when the Leftists are absent, there is no such violence even when there is barely any police presence, as we just demonstrated in Knoxville.

Knock, knock Knoxville. We were there. We have the pictures to prove it. But your media ignored us. We knew that would happen, so long as your Marxists remained in their rat-holes and didn't cause us any trouble. You can ignore us, but you cannot say “not in Knoxville.”

The Brattle of New Orleans

Dr. Michael Hill of the League of the South - Interview

Charlatansville, where the animals have taken control of the farm

In the Wake of Charlottesville

A Report on the Shelbyville #WhiteLivesMatter Rally

Another Discussion with Dr. Michael Hill of the League of the South

The League of the South in Tallahassee, January 27th 2018